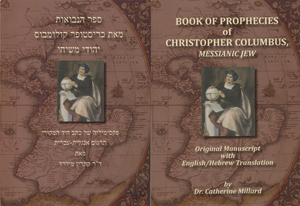 Columbus’ original Book of Prophecies manuscript, which lay practically unknown and obscure for five centuries, proves that his primary allegiance was to God and not to gold, as some modern-day history books have indicated. His vision and burden remained the same – “to bring the gospel to unknown coastlands.” Furthermore, he was a Messianic Jew. His son, Ferdinand Columbus discloses his father’s hidden identity in his book on the life and actions of Admiral Cristobal Colon, and his discovery of the New World. Columbus’ Book of Prophecies’ Scripture quotations being from the Latin Bible, the oldest Old and New Testament translations into English (1609 and 1582, respectively), housed in the Rare Book Collection of the Library of Congress, were utilized. Columbus’ inclusion of a letter from Rabbi Samuel of Israel (a Messianic Jew), to Rabbi Isaac of the Synagogue of Morocco (later to become a Messianic Jew), sheds further light on the Jewish roots of Cristobal Colon.